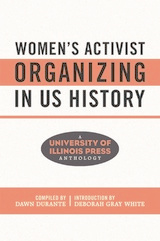 Women in the United States organized around their own sense of a distinct set of needs, skills, and concerns. And just as significant as women's acting on their own behalf was the fact that race, class, sexuality, and ethnicity shaped their strategies and methods. This authoritative anthology presents some of the powerful work and ideas about activism published in the acclaimed series Women, Gender, and Sexuality in American History. Assembled to commemorate the series' thirty-fifth anniversary, the collection looks at two hundred years of labor, activist, legal, political, and community organizing by women against racism, misogyny, white supremacy, and inequality. The authors confront how the multiple identities of an organization's members presented challenging dilemmas and share the histories of how women created change by working against inequitable social and structural systems.

Insightful and provocative, Women’s Activist Organizing in US History draws on both classic texts and recent bestsellers to reveal the breadth of activism by women in the United States in the nineteenth and twentieth centuries.

AUTHOR BIOGRAPHY
Dawn Durante is the editor in chief at the University of Texas Press and the compiler of 100 Years of Suffrage: A University of Illinois Press Anthology.
REVIEWS
"This anthology represents the distance that scholarship has come since the last quarter century of the twentieth century. White middle-class women are no longer the starting point of all feminist scholarship and we now consider how various variables intersect and overlap to influence identity. And for all kinds of reasons, this is something to celebrate."--Deborah Gray White, from the Introduction


"Social work educators will find . . . an opportunity to expose students to nuances of the historical realities of social change that were not covered in traditional public education history courses. . . . Durante and all authors from the text provide us with an intriguing starting point for deep discussions with our students, colleagues, mentees/mentors, and ourselves as we look to the future of the work of women activists." --Affilia

1 “To Cast Our Mite on the Altar of Benevolence: Women Begin to Organize” (Excerpt) 13

2 “‘There Sho’ Was a Sight of Us’: Enslaved Family and Community Rituals” 33

4 “Latin Women from Exiles to Immigrants” 86

6 “‘It Was the Women Who Made the Union’: Organizing the Brotherhood” 138