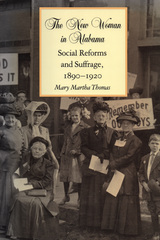 Between 1890 and 1920, middle-class white and black Alabama women created many clubs and organizations that took them out of the home and provided them with roles in the public sphere. Beginning with the Alabama Woman’s Christian Temperance Union in the 1880s and followed by the Alabama Federation of Women’s Clubs and the Alabama Federation of Colored Women’s Clubs in the 1890s, women spearheaded the drive to eliminate child labor, worked to improve the educational system, upgraded the jails and prisons, and created reform schools for both boys and girls.

Suffrage was also an item on the Progressive agenda. After a brief surge of activity during the 1890s, the suffrage drive lay dormant until 1912, when women created the Alabama Equal Suffrage Association. During their campaigns in the 1915 and 1919 to persuade the legislature to enfranchise women, the leaders learned the art of politics—how to educate, organize, lobby, and count votes. Women seeking validation for their roles as homemakers and mother demanded a hearing in the political arena for issues that affected them and their families. In the process they began to erase the line between the public world of men and the private world of women. These were the New Women who tackled the problems created by the industrialization and urbanization of the New South. By 1920 Alabama women had created new public spaces for themselves in these voluntary associations. As a consequence of their involvement in reform crusades, the women’s club movement, and the campaign for woman suffrage, women were no longer passive and dependent. They were willing and able to be rightful participants.

Thomas’s book is the first of its kind to focus on the reform activities of women during the Progressive Era, and the first to consider the southern woman and all the organizations of middle-class black and white women in the South and particularly in Alabama. It is also the first to explore the drive of Alabama women to obtain the vote. The development of political power among southern women progressed slowly. Demolishing as it did the myth of the “Southern Lady.” Traditionally confined to the domestic sphere, southern women had no experience in public decision making and were discouraged from attaining the skills necessary for participation in public debate. The division of women by race and class further impeded their political education. But through their participation in so-called women’s issues—child labor laws, temperance, and educational reform—women gained experience in influencing political leaders. Black and white women’s clubs provided the framework for state-wide lobbying.

Only in the wake of their success with domestic issues tackled through club organizations and temperance unions did women dare seek the right to vote. They learned how to wield political power through acceptable “ladylike” avenues, and it was this experience that led to their long but eventually successful drive for woman suffrage. The New Woman eventually found a way to replace the Southern Lady.

Mary Martha Thomas is Professor of History at JacksonvilleStateUniversity.