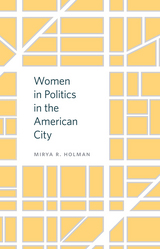 How do female municipal leaders influence policymaking in American cities? Can gender determine who gets a say in local politics or what programs cities fund? These are some of the questions raised and answered in Mirya Holman's provocative Women in Politics in the American City.

This book provides the first comprehensive evaluation of the influence of gender on the behavior of mayors and city council members in the United States. Holman considers the effects of gender in local, urban politics and analyzes how a leader's gender does-and does not-influence policy preferences, processes, behavior, and outcomes.

Holman effectively uses original survey data to evaluate policy attitudes, combined with observations of city council meetings and interviews with leaders and community members. In doing so, she demonstrates the importance of considering the gender of leaders in local office.

Women in Politics in the American City emphasizes that the involvement of women in local politics does matter and that it has significant consequences for urban policy as well as state and local democracy.
AUTHOR BIOGRAPHY
Mirya R. Holman is Assistant Professor of Political Science at Florida Atlantic University.
TABLE OF CONTENTS