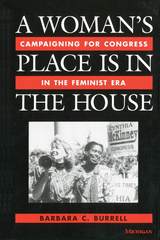 In this first comprehensive examination of women candidates for the U.S. House of Representatives, Barbara Burrell argues that women are as successful at winning elections as men. Why, then, are there still so few women members of Congress? Compared to other democratically elected national parliaments, the U.S. Congress ranks very low in its proportion of women members. During the past decade, even though more and more women have participated in state and local governments, they have not made the same gains at the national level.
A Woman's Place Is in the House examines the experiences of the women who have run for a seat in the U.S. House of Representatives from 1968 through 1992 and compares their presence and performance with that of male candidates. The longitudinal study examines both general and primary elections and refutes many myths associated with women candidates including their ability to raise money and garner support from both interest groups and political parties.
According to Burrell, election year 1992 was correctly dubbed the "Year of the Woman" in American politics--not so much because women overcame perceived barriers to being elected but because for the first time a significant number of women chose to run in primaries. Burrell's study examines the effects women are having on the congressional agenda and offers insight on how such issues as term limitations and campaign finance reform will impact on the election of women to Congress.
Barbara Burrell (Ph.D. University of Michigan) is professor and director of graduate studies in the Political Science Department at Northern Illinois University where she teaches courses in public opinion, political behavior and women and politics.