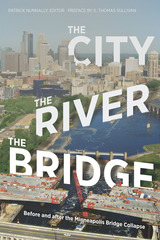 On August 1, 2007, just after 6:00 p.m., during the evening rush hour in Minneapolis, the 1,900-foot-long, eight-lane I-35W bridge buckled and crashed into the Mississippi River. The unimaginable had happened right on the doorstep of the University of Minnesota Twin Cities campus. Many of the first responders were from the University, persevering in the midst of chaos and disbelief. In the ensuing weeks, research and engineering teams from the University reviewed the wreckage, searched for causes, and began planning for the future.
The City, the River, the Bridge represents another set of responses to the disaster. Stemming from a 2008 University of Minnesota symposium on the bridge collapse and the building of a new bridge, it addresses the ramifications of the disaster from the perspectives of history, engineering, architecture, water science, community-based journalism, and geography. Contributors examine the factors that led to the collapse, the lessons learned from the disaster and the response, the policy and planning changes that have occurred or are likely to occur, and the impact on the city and the Mississippi River. The City, the River, the Bridge demonstrates the University's commitment to issues that concern the community and shares insights on public questions of city building, infrastructure, and design policy.
Contributors: John O. Anfinson; Roberto Ballarini; Heather Dorsey; Thomas Fisher; Minmao Liao; Judith A. Martin; Roger Miller; Mark Pedelty; Deborah L. Swackhamer; Melissa Thompson.
AUTHOR BIOGRAPHY
Patrick Nunnally is the River Life Program Coordinator in the Institute on the Environment at the University of Minnesota.
E. Thomas Sullivan is Senior Vice President for Academic Affairs and Provost, and Julius E. Davis Chair in Law, at the University of Minnesota.
TABLE OF CONTENTS