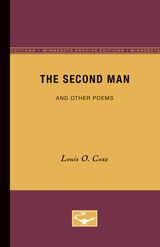 The Second Man and Other Poems
by Louis Coxe
University of Minnesota Press, 1955
Paper: 978-0-8166-6849-6
The Second Man and Other Poems was first published in 1955.The forty poems which make up this second volume of Mr. Coxe’s poetry display an impressive range of subject and technique. He writes of love and religion, of men at sea, of historical moments of violence decision, and of the face of nature. But the predominant themes are those which Mr. Coxe treats with especial authority: the living meaning of his native New England, of its past, and of the people who make it.Mr. Coxe writes many kinds of poetry. There are lyrics, songs, reflective poems, and dramatic monologues. Although he experiments with meter and explores the riches of language, his poetry is traditional in the best sense.Among the poems in this volume are some that have been published previously in such magazines as The New Yorker, Partisan Review, Western Review, Furioso, Hudson Review, Poetry, and Paris Review.