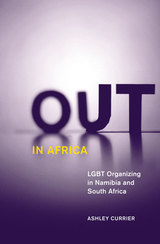 Visibility matters to activists—to their social and political relevance, their credibility, their influence. But invisibility matters, too, in times of political hostility or internal crisis. Out in Africa is the first to present an intimate look at how Namibian and South African lesbian, gay, bisexual, and transgender (LGBT) organizations have cultivated visibility and invisibility as strategies over time. As such, it reveals the complexities of the LGBT movements in both countries as these organizations make use of Western terminology and notions of identity to gain funding even as they work to counter the perception that they are “un-African.”

Different sociopolitical conditions in Namibia and South Africa affected how activists in each country campaigned for LGBT rights between 1995 and 2006. Focusing on this period, Ashley Currier shows how, in Namibia, LGBT activists struggled against ruling party leaders’ homophobic rhetoric and how, at the same time, black LGBT citizens of South Africa, though enjoying constitutional protections, greater visibility, and heightened activism, nonetheless confronted homophobic violence because of their gender and sexual nonconformity.

As it tells the story of the evolving political landscape in postapartheid Namibia and South Africa, Out in Africa situates these countries’ movements in relation to developments in pan-African LGBT organizing and offers broader insights into visibility as a social movement strategy rather than simply as a static accomplishment or outcome of political organizing.

Ashley Currier is assistant professor of women’s, gender, and sexuality studies at the University of Cincinnati.

1. The Rise of LGBT Organizing in Namibia and South Africa

4. Homosexuality Is African: Struggles “to Be Seen”