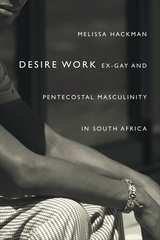 In postapartheid Cape Town—Africa's gay capital—many Pentecostal men turned to "ex-gay" ministries in hopes of “curing” their homosexuality in order to conform to conservative Christian values and African social norms. In Desire Work Melissa Hackman traces the experiences of predominantly white ex-gay men as they attempt to forge a heterosexual masculinity and enter into heterosexual marriage through emotional, bodily, and religious work. These men subjected themselves to daily self-surveillance and followed prescribed behaviors such as changing how they talked and walked. Ex-gay men also saw themselves as participating in the redemption of the nation, because South African society was perceived as suffering from a crisis of masculinity in which the country lacked enough moral heterosexual men. By tying the experience of ex-gay men to the convergence of social movements and public debates surrounding race, violence, religion, and masculinity in South Africa, Hackman offers insights into the construction of personal identities in the context of sexuality and spirituality.
AUTHOR BIOGRAPHY
Melissa Hackman is an independent scholar who has taught at Brown University and Emory University.
REVIEWS
-- W. Arens Choice