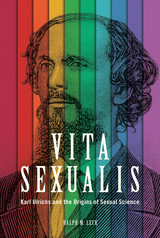 Karl Ulrichs's studies of sexual diversity galvanized the burgeoning field of sexual science in the nineteenth century. But in the years since, his groundbreaking activism for the emancipation of homosexuality has overshadowed his scholarly achievements.Ralph M. Leck returns Ulrichs to his place as the inventor of the science of sexual heterogeneity. Leck's analysis situates sexual science in thematic contexts that include political history, aesthetics, amatory studies, and the language of science. Although he was the greatest nineteenth-century scholar of sexual heterogeneity, Ulrichs retained certain traditional conjectures about gender. Leck recognizes these subtleties and employs the analytical concepts of modernist vita sexualis and traditional psychopathia sexualis to articulate philosophical and cultural differences among sexologists.Original and audacious, Vita Sexualis uses a bedrock figure's scientific and political innovations to open new insights into the history of sexual science, legal systems, and Western amatory codes.
AUTHOR BIOGRAPHY

Ralph M. Leck has taught for many years in the University Honors Program at Indiana State University. He is the former director of Peace and Justice Studies at Marian University, Indianapolis. He is the author of Georg Simmel and Avant-Garde Sociology: The Birth of Modernity, 1880–1920.