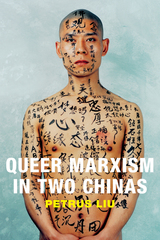 In Queer Marxism in Two Chinas Petrus Liu rethinks the relationship between Marxism and queer cultures in mainland China and Taiwan. Whereas many scholars assume the emergence of queer cultures in China signals the end of Marxism and demonstrates China's political and economic evolution, Liu finds the opposite to be true. He challenges the persistence of Cold War formulations of Marxism that position it as intellectually incompatible with queer theory, and shows how queer Marxism offers a nonliberal alternative to Western models of queer emancipation. The work of queer Chinese artists and intellectuals not only provides an alternative to liberal ideologies of inclusion and diversity, but demonstrates how different conceptions of and attitudes toward queerness in China and Taiwan stem from geopolitical tensions. With Queer Marxism in Two Chinas Liu offers a revision to current understandings of what queer theory is, does, and can be.
AUTHOR BIOGRAPHY
Petrus Liu is Associate Professor of Humanities at Yale-NUS College and the author of Stateless Subjects: Chinese Martial Arts Literature and Postcolonial History.
REVIEWS
-- Alvin K. Wong Twentieth-Century China

1. Marxism, Queer Liberalism, and the Quandary of Two Chinas  1

3.The Rise of the Queer Chinese Novel  85

5. Queer Human Rights in and aganist the Two Chinas  138