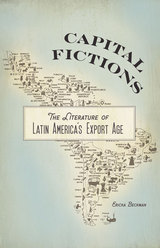 Between 1870 and 1930, Latin American countries were incorporated into global capitalist networks like never before, mainly as exporters of raw materials and importers of manufactured goods. During this Export Age, entire regions were given over to the cultivation of export commodities such as coffee and bananas, capital and labor were relocated to new production centers, and barriers to foreign investment were removed. Capital Fictions investigates the key role played by literature in imagining and interpreting the rapid transformations unleashed by Latin America’s first major wave of capitalist modernization.

Using an innovative blend of literary and economic analysis and drawing from a rich interdisciplinary archive, Ericka Beckman provides the first extended evaluation of Export Age literary production. She traces the emergence of a distinct set of fictions, fantasies, and illusions that accompanied the rise of export-led, dependent capitalism. These “capital fictions” range from promotional pamphlets for Guatemalan coffee and advertisements for French fashions, to novels about stock market collapse in Argentina and rubber extraction in the Amazon.

Beckman explores how Export Age literature anticipated some of the key contradictions faced by contemporary capitalist societies, including extreme financial volatility, vast social inequality, and ever-more-intense means of exploitation. Questioning the opposition between culture and economics in Latin America and elsewhere, Capital Fictions shows that literature operated as a powerful form of political economy during this period.

Ericka Beckman is assistant professor of Spanish and comparative literature at the University of Illinois at Urbana-Champaign.

3. Money I: Financial Crisis and the Stock Market Novel

5. Exploitation: A Journey to the Export Real