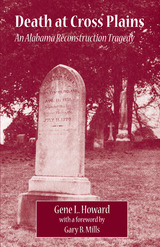 Reconstruction in the South is a much studied and yet little understood dark epoch in the region’s history; in many areas it was marked by such violence as to have been in all but name guerrilla warfare. Death at Cross Plains is the history of one such clash, and the story of one of its casualties—William Luke.

Luke, born in Ireland, was a former Canadian minister fleeing a checkered past and perhaps seeking to redeem himself by service to the black freedmen of northern Alabama. In 1869 he took a teaching post at Talladega College, the only school for blacks in the area. Later taking the position of schoolteacher to the black railroad workers near Talladega, Luke found himself enmeshed in the web of racial antagonisms, xenophobia, and partisan conflict rampant in much of the South

Death at Cross Plains follows the tragic course of William Luke’s life and death and vividly depicts the hatreds and failures that plunged the South into its darkest days.
AUTHOR BIOGRAPHY
Gene L. Howard is a native of Rome, Georgia, and now makes his home in Wellington, Alabama. He is a graduate of The University of Alabama, and this is his first book.
TABLE OF CONTENTS