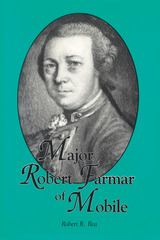 The flamboyant military career of a colonist loyal to the British crown before the Revolution.

"An engaging biography [and] a colorful tale. . . . Robert Farmar, a son of New Jersey, used his position among that colony's elite to secure a commission as a captain in the British Army during the War of Jenkins' Ear and King George's War, serving in the unsuccessful assaults at Cartegena, Cuba, and Panama and then in the disaster at Fontenoy in Flanders and in the reversals at Rocoux and Laffeldt. . . . During the Seven Years' War he participated in the capture of Havana.

"Farmar's most remarkable feat was survival. In a time when soldiers and officers were dropping like flies from both disease and bullets, Farmar emerged unscathed. . . . Farmar commanded the expedition that ascended the Mississippi to occupy Fort Chartes in the Illinois country—a feat in itself."—Journal of American History

"Robert Farmar was the kind of soldier with whom the British built an empire. . . . This is an excellent study of military administration in the first British Empire and of the tremendous difficulty it involved."—American Historical Review