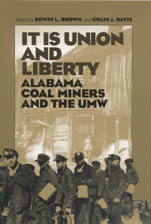 This history of Alabama's coal miners documents the struggle not
only between labor and management but also between interracial unionism
and white supremacy.

Much of Alabama's labor history is written in its coal
fields. This book records the critical contribution that District 20 of
the United Mine Workers of America played in the state's labor movement
through its strong stands on such issues as child labor, public education,
and inter-racial unions.

Standing at the cutting edge of social and political
history, these essays cover five periods over a century of union activity:
the emergence of a militant labor force during mining's formative years;
the World War I era, when mine operators tried to divide black and white
labor; the increasing role of the state in labor relations during the interwar
years; rapid changes in the union between 1942 and 1975; and the 1977-79
strike, the largest in the United Mine Workers' history.

Through historic
photographs and depictions of living and working conditions, contributors
Edwin L. Brown, Colin J. Davis, Daniel Letwin, Brian M. Kelly, Peter Alexander,
Glenn Feldman, and Robert H. Woodrum portray the world that miners, both
black and white, made. In a state where racial segregation was the norm,
even the earliest District 20 contract proposals demanded equal pay for
equal work regardless of color. It Is Union and Liberty shows that the
UMW in Alabama stands apart from perceptions of southern trade unionism
as exclusionary and racially fragmented. It sheds light on an important
segment of the state's labor history and is a testament to District 20
on its centennial celebration.