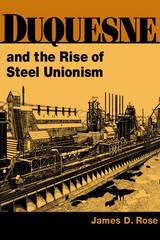 Duquesne and the Rise of Steel Unionism
by James D. Rose
University of Illinois Press, 2001
Cloth: 978-0-252-02660-7
Not all workers' needs were served by the union. Focusing on the steel works at Duquesne, Pennsylvania, a linchpin of the old Carnegie Steel Company empire and then of U.S. Steel, James D. Rose demonstrates the pivotal role played by a nonunion form of employee representation usually dismissed as a flimsy front for management interests.

The early New Deal set in motion two versions of workplace representation that battled for supremacy: company-sponsored employee representation plans (ERPs) and independent trade unionism. At Duquesne, the cause of the unskilled, hourly workers, mostly eastern and southern Europeans as well as blacks, was taken up by the union -- the Fort Dukane Lodge of the Amalgamated Association of Iron, Steel, and Tin Workers. For skilled tonnage workers and skilled tradesmen, mainly U.S.-born and of northern and western European extraction, ERPs offered a better solution.

Initially little more than a crude antiunion device, ERPs matured from tools of the company into semi-independent, worker-led organizations. Isolated from the union movement through the mid-1930s, ERP representatives and management nonetheless created a sophisticated bargaining structure that represented the shop-floor interests of the mill's skilled workforce. Meanwhile, the Amalgamated gave way to the Steel Workers Organizing Committee, a professionalized and tightly organized affiliate of John L. Lewis's CIO that expended huge resources trying to gain companywide unionization. Even when the SWOC secured a collective bargaining agreement with U.S. Steel in 1937, however, the Union was still unable to sign up a majority of the workforce at Duquesne.

A sophisticated study of the forces that shaped and responded to workers' interests, Duquesne and the Rise of Steel Unionism confirms that what people did on the shop floor was as critical to the course of steel unionism as were corporate decision making and shifts in government policy.