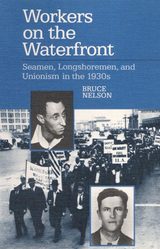 With working lives characterized by exploitation and rootlessness, merchant seamen were isolated from mainstream life. Yet their contacts with workers in port cities around the world imbued them with a sense of internationalism. These factors contributed to a subculture that encouraged militancy, spontaneous radicalism, and a syndicalist mood. Bruce Nelson's award-winning book examines the insurgent activity and consciousness of maritime workers during the 1930s. As he shows, merchant seamen and longshoremen on the Pacific Coast made major institutional gains, sustained a lengthy period of activity, and expanded their working-class consciousness. Nelson examines the two major strikes that convulsed the region and caused observers to state that day-to-day labor relations resembled guerilla warfare. He also looks at related activity, from increasing political activism to stoppages to defend laborers from penalties, refusals to load cargos for Mussolini's war in Ethiopia, and forced boardings of German vessels to tear down the swastika.
AUTHOR BIOGRAPHY
Bruce Nelson is an emeritus professor in the Department of History at Dartmouth College.
REVIEWS
Winner of the Frederick Jackson Turner Award of the Organization of American Historians, 1989.
— Organization of American Historians