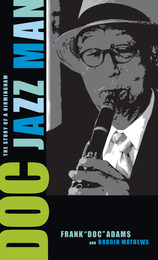 Autobiography of jazz elder statesman Frank “Doc” Adams, highlighting his role in Birmingham, Alabama’s, historic jazz scene and tracing his personal adventure that parallels, in many ways, the story and spirit of jazz itself.

Doc tells the story of an accomplished jazz master, from his musical apprenticeship under John T. “Fess” Whatley and his time touring with Sun Ra and Duke Ellington to his own inspiring work as an educator and bandleader.

Central to this narrative is the often-overlooked story of Birmingham’s unique jazz tradition and community. From the very beginnings of jazz, Birmingham was home to an active network of jazz practitioners and a remarkable system of jazz apprenticeship rooted in the city’s segregated schools. Birmingham musicians spread across the country to populate the sidelines of the nation’s bestknown bands. Local musicians, like Erskine Hawkins and members of his celebrated orchestra, returned home heroes. Frank “Doc” Adams explores, through first-hand experience, the history of this community, introducing readers to a large and colorful cast of characters—including “Fess” Whatley, the legendary “maker of musicians” who trained legions of Birmingham players and made a significant mark on the larger history of jazz. Adams’s interactions with the young Sun Ra, meanwhile, reveal life-changing lessons from one of American music’s most innovative personalities.

Along the way, Adams reflects on his notable family, including his father, Oscar, editor of the Birmingham Reporter and an outspoken civic leader in the African American community, and Adams’s brother, Oscar Jr., who would become Alabama’s first black supreme court justice. Adams’s story offers a valuable window into the world of Birmingham’s black middle class in the days before the civil rights movement and integration. Throughout, Adams demonstrates the ways in which jazz professionalism became a source of pride within this community, and he offers his thoughts on the continued relevance of jazz education in the twenty-first century.

Dr. Frank “Doc” Adams (1928–2014) served Birmingham City Schools for more than forty years, both as a band director and as the district’s supervisor of music. For his contributions to Alabama jazz, he was a charter inductee, in 1978, to the Alabama Jazz Hall of Fame.

Burgin Mathews is a writer and teacher who has written on the music of the American South. He lives in Birmingham, Alabama.