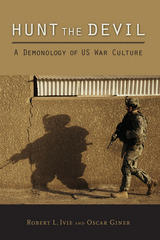 Hunt the Devil is a timely and illuminating exploration of demonic imagery in US war culture. In it, authors Robert L. Ivie and Oscar Giner examine the origins of the Devil figure in the national psyche and review numerous examples from US history of the demonization of America’s perceived opponents. Their analysis demonstrates that American military deployments are often part of a cycle of mythical projection wherein the Devil repeatedly appears anew and must be exorcised through redemptive acts of war, even at the cost of curtailing democratic values.

Meticulously researched, documented, and argued, Hunt the Devil opens with contemporary images of the US’s global war on terror in the aftermath of 9/11. In five chapters devoted to the demonization of evildoers, witches, Indians, dictators, and Reds by American writers, in presidential rhetoric, and in popular culture, Ivie and Giner show how the use of demonization in the war on terror is only the most recent manifestation of a process that has recurred throughout American history.

In a sixth chapter, the authors introduce the archetype of the Trickster. Though not opposed to the Devil per se, the Trickster’s democratic impulses have often provided a corrective antidote to the corrosive and distorting effects of demonization. Invoking the framework of Carl Jung’s shadow aspect, Hunt the Devil offers the Trickster as a figure who can break the cycle of demonization and war.

The role of the mythic Devil in the American psyche has profound implications, not just for American diplomacy and the use of American arms in the world, but for the possibility of domestic peace within an increasingly diverse society. Hunt the Devil provides much of interest to readers and scholars in the fields of war, rhetorical studies, American Studies, US political culture, Jungian psychology, and mythography.
AUTHOR BIOGRAPHY
Robert L. Ivie is a professor emeritus of American studies and communication and culture at Indiana University. He is the author of Democracy and America’s War on Terror. Oscar Giner is a professor of theatre and film at Arizona State University. He is at work on a book-length cultural history of the Scarface films and their relations to American identity, gangsterism, and hip-hop culture.
TABLE OF CONTENTS
Contents
Acknowledgments
Introduction
1. Evildoers
2. Witches
3. Indians
4. Dictators
5. Reds
6. Tricksters
Conclusion
Notes
Selected Bibliography
Index