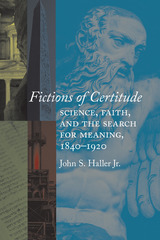 The search for belief and meaning among nineteenth-century intellectuals

The nineteenth century’s explosion of scientific theories and new technologies undermined many deep-seated beliefs that had long formed the basis of Western society, making it impossible for many to retain the unconditional faith of their forebears. A myriad of discoveries—including Faraday’s electromagnetic induction, Joule’s law of conservation of energy, Pasteur’s germ theory, Darwin’s and Wallace’s theories of evolution by natural selection, and Planck’s work on quantum theory—shattered conventional understandings of the world that had been dictated by traditional religious teachings and philosophical systems for centuries.

Fictions of Certitude: Science, Faith, and the Search for Meaning, 1840–1920 investigates the fin de siècle search for truth and meaning in a world that had been radically transformed. John S. Haller Jr. examines the moral and philosophical journeys of nine European and American intellectuals who sought deeper understanding amid such paradigmatic upheaval. Auguste Comte, John Henry Newman, Herbert Spencer, Alfred Russel Wallace, Thomas Henry Huxley, John Fiske, William James, Lester Frank Ward, and Paul Carus all belonged to an age in which one world was passing while another world that was both astounding and threatening was rising to take its place.

For Haller, what makes the work of these nine thinkers worthy of examination is how they strove in different ways to find certitude and belief in the face of an epochal sea change. Some found ways to reconceptualize a world in which God and nature coexist. For others, the challenge was to discern meaning in a world in which no higher power or purpose can be found. As explained by D. H. Meyer, “The later Victo­rians were perhaps the last generation among English-speaking intellectuals able to believe that man was capable of understanding his universe, just as they were the first generation collectively to suspect that he never would.”
AUTHOR BIOGRAPHY
John S. Haller Jr. is emeritus professor of history and medical humanities at Southern Illinois University, Carbondale, and has written on subjects ranging from the history of race and sexuality to medicine, pharmacy, and spirituality. He is former editor of Caduceus: A Humanities Journal for Medicine and the Health Sciences and, until his retirement, served for twenty years as vice president for academic affairs for the Southern Illinois University System.

Chapter 7. Will to Believe: William James