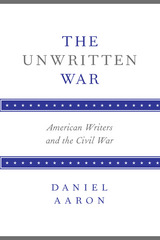 In The Unwritten War, Daniel Aaron examines the literary output of American writers—major and minor—who treated the Civil War in their works. He seeks to understand why this devastating and defining military conflict has failed to produce more literature of a notably high and lasting order, why there is still no "masterpiece" of Civil War fiction.

In his portraits and analyses of 19th- and some 20th-century writers, Aaron distinguishes between those who dealt with the war only marginally—Henry Adams, Henry James, William Dean Howells, Mark Twain-and those few who sounded the war's tragic import—Herman Melville, Walt Whitman, and William Faulkner. He explores the extent to which the war changed the direction of American literature and how deeply it entered the consciousness of American writers. Aaron also considers how writers, especially those from the South, discerned the war's moral and historical implications.

The Unwritten War was originally published by Alfred A. Knopf in 1973. The New Republic declared, [This book's] major contribution will no doubt be to American literary history. In this respect it resembles Edmund Wilson's Patriotic Gore and is certain to become an indispensable guide for anyone who wants to explore the letters, diaries, journals, essays, novels, short stories, poems-but apparently no plays-which constitute Civil War literature. The mass of material is presented in a systematic, luminous, and useful way.

Daniel Aaron is Professor Emeritus of American Literature at Harvard University and founding president of the Library of America series of classic writings by American authors. He has written many books on American history and literature, including Men of Good Hope: A Story of American Progressives and American Notes.

REVIEWS
"[This] is clearly [Aaron's] best book. His effort . . . Is scrupulous and backed by a thorough and unassuming scholarship."
—New York Times
— -