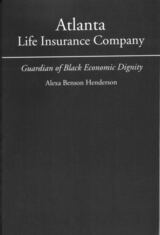 The story of Atlanta Life Insurance Company, with its humble beginning as a small mutual aid association, depicts the inspiring efforts of black Americans to build and sustain economic organizations and enterprises. Its study also fits in to the mosaic of activities, extending back to the pre-Civil War era, that were aimed at developing an economic base within the black community.

These efforts gained new meaning in the post-Reconstruction period as blacks strove to survive in an America that was increasingly characterized by rampant racism and a host of economic and social restrictions based on race. In this environment, a significant number of black leaders urged business development and the amassing of wealth among black Americans as the primary means by which the race could end its disadvantage in American society and achieve respect and citizenship.

In Atlanta, shortly after the turn of the century, Alonzo Franklin Herndon, a former slave, joined a long line of promoters of black enterprise by creating Atlanta Life Insurance Company. More than three-quarters of a century later, it is an important enterprise that is the nation’s largest black-controlled shareholder insurance company. With more than $108.7 million in assets, the firm is today a significant example of the efforts of black Americans to achieve economic dignity in America.

Henderson focuses on the historic roots of Atlanta Life, its economic growth and development as a black-owned institution, and its social and economic involvement with the problems and progress of black America. Depicting circumstances that varied from race riots and hostility to investigations by stave regulatory boards to depression to efforts at acquiring special Congressional legislation protecting stock ownership, Henderson relates important details of the Atlanta Life story and its identity with the society it served.
AUTHOR BIOGRAPHY
Alexa Benson Henderson is professor of History and Chair of the Division of General Education at Clark College.