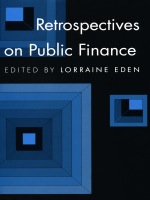 Retrospectives on Public Finance contains original analyses by internationally recognized public finance scholars, including Carl Sumner Shoup, one of the discipline’s most famous practitioners. Shoup, along with Richard Musgrave and his students, pioneered the “prescriptive” or “political economy school” of public finance known for its hands-on approach and its commitment to applying theory to real world problems.
Each contributor provides a retrospective on Shoup’s various contributions to the field, reviewing the literature and assessing its relevance to current problems in public finance theory and policy. The essays highlight and analyze fiscal theory and public policy developments from the 1930s to the present in four areas: the Shoup tax missions to Japan, Venezuela, and Liberia; the tax mix; the expenditure mix; and macro public finance.

4. The Impact of the Shoup Report on Japanese Economic Development / Minoru Nakazato 51

7. The Corporate Income Tax and How to Get Rid of It / William Vickery 118

8. Intellectual Foundations of the VAT in North America and Japan / Wayne Thirsk 133

9. The Place of the Property Tax in the Fiscal System / John F. Graham 149

13. Tax Structure and the Growth of Government / Richard M. Bird 263

14. Fiscal Coordination and Competition in an International Setting / Peggy B. Musgrave 276