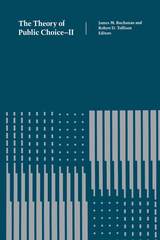 That economics can usefully explain politics is no longer a novel idea, it is a well-established fact brought about by the work of many public choice scholars. This book, which is a sequel to a similar volume published in 1972, brings together a fresh collection of recent work in the public choice tradition. The essays demonstrate the power of the public choice approach in the analysis of government. Among the issues considered are income redistribution, fiscal limitations on government, voting rules and processes, the demand for public goods, the political business cycle, international negotiations, interest groups, and legislators.