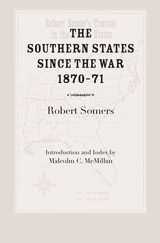 The Southern States Since The War
by Robert Somers
introduction by Malcolm C. McMillan
University of Alabama Press, 1965
Paper: 978-0-8173-5153-3
A journey through the South soon after the Civil War.

"Robert Somers was a Scottish newspaperman with a strong interest in social and economic matters. When a Glasgow newspaper he edited failed in 1870, Somers set sail for the U.S. in order to investigate firsthand the effect of the Civil War on the South. For five months he toured the South gathering information both from conversation and from newspapers and other printed material. . . . His book was the work of a perceptive observer. . . . Somers' visit came at the height of the cotton marketing season, and his chronicle contains much valuable information about changing methods in the trade of the South's chief crop."

"Robert Somers was a happy exception to the usual run of reconstruction visitors. . . . His temperament, education, and journalistic experience caused him to record his Reconstruction observations with remarkable objectivity and restraint. His primary interest was economic, [and] his detailed and perceptive comments on railroads are excellent historical sources. . . . Professor Malcolm C. McMillan's excellent introduction and index add much to the volume."

--Bell I. Wiley, The Jackson Sun
TABLE OF CONTENTS