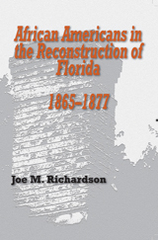 Despite their shortcomings, “radical” politicians, including African Americans, made worthy contributions to the state of Florida during the era of Reconstruction. Joe Richardson disputes many of the misconceptions about the state’s debt and corruption by exploring how some African American politicians were quite capable and learned their duties quickly. Even more remarkable was the rapidity with which the unlettered ex-slaves absorbed education and adjusted to their status as free men. African Americans in the Reconstruction of Florida delves into the problems encountered by the freed men and traces their successes and failures during the first decade after emancipation.

Joe M. Richardson is Emeritus Professor of history, Florida State University, and is the author of A History of Fisk University, Christian Reconstruction: The American Missionary Association and Southern Blacks, 1861-1890, and with Maxine D. Jones, Talladega College: The First Century, and is editor of The Trial and Imprisonment of Jonathan Walker.