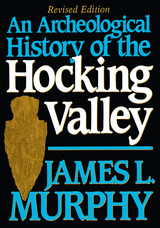 A deliberate effort to present archeological finds of interest to both the professional archeologist and the layman in terms understandable to both has been coupled with an attempt to distinguish clearly between the presentation of facts and the presentation of opinion. The book is enhanced by illustrations of much of the artifact material analyzed in the text, site diagrams, and a map locating all major known archeological sites in the Hocking Valley, and an appendix locating and describing all sites discussed in the text.