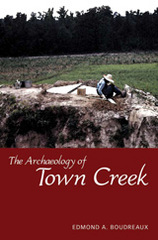 The sequence of change for public architecture during the Mississippian period may reflect a centralization of political power through time. In the research presented here, some of the community-level assumptions attributed to the appearance of Mississippian mounds are tested against the archaeological record of the Town Creek site—the remains of a town located on the northeastern edge of the Mississippian culture area. In particular, the archaeological record of Town Creek is used to test the idea that the appearance of Mississippian platform mounds was accompanied by the centralization of political authority in the hands of a powerful chief.

A compelling argument has been made that mounds were the seats and symbols of political power within Mississippian societies. While platform mounds have been a part of Southeastern Native American communities since at least 100 B.C., around A.D. 400 leaders in some communities began to place their houses on top of earthen mounds—an act that has been interpreted as an attempt to legitimize personal authority by a community leader through the appropriation of a powerful, traditional, community-oriented symbol. Platform mounds at a number of sites were preceded by a distinctive type of building called an earthlodge—a structure with earth-embanked walls and an entrance indicated by short, parallel wall trenches. Earthlodges in the Southeast have been interpreted as places where a council of community leaders came together to make decisions based on consensus. In contrast to the more inclusive function proposed for premound earthlodges, it has been argued that access to the buildings on top of Mississippian platform mounds was limited to a much smaller subset of the community. If this was the case and if ground-level earthlodges were more accessible than mound-summit structures, then access to leaders and leadership may have decreased through time.

Excavations at the Town Creek archaeological site have shown that the public architecture there follows the earthlodge-to-platform mound sequence that is well known across the South Appalachian subarea of the Mississippian world. The clear changes in public architecture coupled with the extensive exposure of the site's domestic sphere make Town Creek an excellent case study for examining the relationship among changes in public architecture and leadership within a Mississippian society.
AUTHOR BIOGRAPHY
Edmund A. (Tony) Boudreaux is Archaeologist and Senior Projects Manager at Coastal Environments, Inc.
REVIEWS