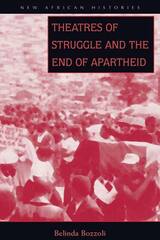 A compelling study of the origins and trajectory of one of the legendary black uprisings against apartheid, Theatres of Struggle and the End of Apartheid draws on insights gained from the literature on collective action and social movements. It delves into the Alexandra Rebellion of 1986 to reveal its inner workings.

Belinda Bozzoli’s aim is to examine how the residents of Alexandra, a poverty-stricken segregated township in Johannesburg, manipulated and overturned the meanings of space, time, and power in their sequestered world. She explains how they used political theater to convey, stage, and dramatize their struggle and how young and old residents generated differing ideologies and tactics, giving rise to a distinct form of generational politics.

Theatres of Struggle and the End of Apartheid asks the reader to enter into the world of the rebels and to confront the moral complexity and social duress they experienced as they invented new social forms and violently attacked old ones. It is an important study of collective action that will be of great interest to sociologists and to scholars of Africa, particularly to those interested in the antiapartheid struggle.

Belinda Bozolli is a professor of sociology and deputy vice-chancellor for research at the University of the Witwatersrand, Johannesburg. She was born in South Africa and educated in Johannesburg and the UK. She was the founding director of the South African History Workshop and has played a leading role in developing critical scholarship in South Africa. She is the author of The Political Nature of a Ruling Class and Women of Phokeng.

REVIEWS
"I can only admire the texture and empirical depth of Bozzoli’s account. It pulls the reader into a story that unfolds chapter by chapter; it creates a kind of awful fascination with how hope and liberation were folded in with cruelty and blindness in South Africa. This book has the potential to create productive controversy.”—Jo Beall, Development Studies Institute, London School of Economics


“(Bozzoli) draws upon thousands of archived interviews with the actors involved to create a rich and cohesive story that one cannot help but think sets the stage for the horrendously high rate of violence experienced in the country today.” —African Studies Quarterly