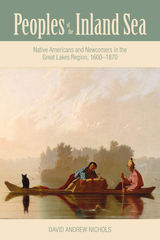 Diverse in their languages and customs, the Native American peoples of the Great Lakes region—the Miamis, Ho-Chunks, Potawatomis, Ojibwas, and many others—shared a tumultuous history. In the colonial era their rich homeland became a target of imperial ambition and an invasion zone for European diseases, technologies, beliefs, and colonists. Yet in the face of these challenges, their nations’ strong bonds of trade, intermarriage, and association grew and extended throughout their watery domain, and strategic relationships and choices allowed them to survive in an era of war, epidemic, and invasion.

In Peoples of the Inland Sea, David Andrew Nichols offers a fresh and boundary-crossing history of the Lakes peoples over nearly three centuries of rapid change, from pre-Columbian times through the era of Andrew Jackson’s Removal program. As the people themselves persisted, so did their customs, religions, and control over their destinies, even in the Removal era. In Nichols’s hands, Native, French, American, and English sources combine to tell this important story in a way as imaginative as it is bold. Accessible and creative, Peoples of the Inland Sea is destined to become a classroom staple and a classic in Native American history.

David Andrew Nichols is a professor of history at Indiana State University. He is the author of two previous books on Native American history, Red Gentlemen and White Savages (2008) and Engines of Diplomacy (2016). He is also the North American book review editor for the journal Ethnohistory.

TABLE OF CONTENTS
Contents
Illustrations
Series Editors’ Preface
Introduction
1: Once and Future Civilizations
2: The European Disruption
3: France’s Uneasy Imperium
4: The Hazards of War
5: Nativists and Newcomers
6: Revolutionary Stalemate
7: The United Indians versus the United States
8: Survival and Nation Building on the Edge of Empire
9: Reckoning with the Conquerors
10: Trails of Death and Paths of Renewal
Conclusion: The Last Imperial War and the Last Removals
Acknowledgments
Notes
Bibliography
Index