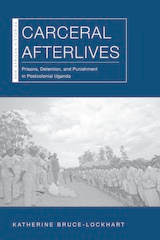 Drawing upon social history, political history, and critical prison studies, this book analyzes how prisons and other instruments of colonial punishment endured after independence and challenges their continued existence.

In Carceral Afterlives, Katherine Bruce-Lockhart traces the politics, practices, and lived experiences of incarceration in postcolonial Uganda, focusing on the period between independence in 1962 and the beginning of Yoweri Museveni’s presidency in 1986. During these decades, Ugandans experienced multiple changes of government, widespread state violence, and war, all of which affected the government’s approach to punishment. Bruce-Lockhart analyzes the relationship between the prison system and other sites of confinement—including informal detention spaces known as “safe houses” and wartime camps—and considers other forms of punishment, such as public executions and “disappearance” by state paramilitary organizations.

Through archival and personal collections, interviews with Ugandans who lived through these decades, and a range of media sources and memoirs, Bruce-Lockhart examines how carceral systems were imagined and experienced by Ugandans held within, working for, or impacted by them. She shows how Uganda’s postcolonial leaders, especially Milton Obote and Idi Amin, attempted to harness the symbolic, material, and coercive power of prisons in the pursuit of a range of political agendas. She also examines the day-to-day realties of penal spaces and public perceptions of punishment by tracing the experiences of Ugandans who were incarcerated, their family members and friends, prison officers, and other government employees. Furthermore, she shows how the carceral arena was an important site of dissent, examining how those inside and outside of prisons and other spaces of captivity challenged the state’s violent punitive tactics.

Using Uganda as a case study, Carceral Afterlives emphasizes how prisons and the wider use of confinement—both as a punishment and as a vehicle for other modes of punishment—remain central to state power in the Global South and North. While scholars have closely analyzed the prison’s expansion through colonial rule and the rise of mass incarceration in the United States, they have largely taken for granted its postcolonial persistence. In contrast, Bruce-Lockhart demonstrates how the prison’s transition from a colonial to a postcolonial institution explains its ubiquity and reveals ways to critique and challenge its ongoing existence. The book thus explores broader questions about the unfinished work of decolonization, the relationship between incarceration and struggles for freedom, and the prison’s enduring yet increasingly contested place in our global institutional landscape.

Katherine Bruce-Lockhart is an assistant professor of history at the University of Waterloo and affiliated faculty at the Balsillie School of International Affairs. She holds a PhD from the University of Cambridge. Her work has appeared in the Journal of Eastern African Studies, the Journal of World History, History in Africa, and the edited collection Decolonization and Conflict: Colonial Comparisons and Legacies, among other places.