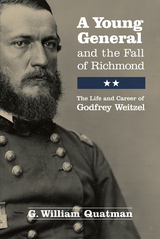 Despite his military achievements and his association with many of the great names of American history, Godfrey Weitzel (1835–1884) is perhaps the least known of all the Union generals. After graduating from West Point, Weitzel, a German immigrant from Cincinnati, was assigned to the Army Corps of Engineers in New Orleans. The secession of Louisiana in 1861, with its key port city of New Orleans, was the first of a long and unlikely series of events that propelled the young Weitzel to the center of many of the Civil War’s key battles and brought him into the orbit of such well-known personages as Lee, Beauregard, Butler, Farragut, Porter, Grant, and Lincoln. Weitzel quickly rose through the ranks and was promoted to brigadier general and, eventually to commander of Twenty-Fifth Corps, the Union Army’s only all-black unit. After fighting in numerous campaigns in Louisiana and Virginia, on April 3, 1865, Weitzel marched his troops into Richmond, the capital of the Confederacy, capturing the city for the Union and precipitating the eventual collapse of the Southern states’ rebellion.

G. William Quatman’s minute-by-minute narrative of the fall of Richmond lends new insight into the war’s end, and his keen research into archival sources adds depth and nuance to the events and the personalities that shaped the course of the Civil War.

G. William Quatman is an architect and attorney in Kansas City, Missouri, and the author of several books and articles on the legal aspects of design and construction. This is his first historical biography.