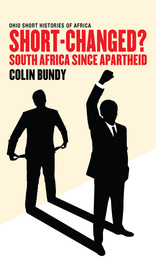 What have been the most significant developments—political, social, economic—in South Africa since 1994? How much has changed since the demise of apartheid, and how much remains stubbornly the same? Should one celebrate a robust democracy now two decades old, or lament the corrosive effects of factionalism, greed, and corruption on political life? Colin Bundy tries to answer such questions, while avoiding simplistic or one-sided assessments of life under Mandela, Mbeki, and Zuma. He recognizes real advances under ANC rule but also identifies the limits and contradictions of such progress. Bundy demonstrates, too, how the country’s past permeates the present, complicating and constraining the politics of transition, so that genuine transformation has been short-changed.

AUTHOR BIOGRAPHY
Colin Bundy is one of South Africa’s foremost historians and the author of The Rise and Fall of the South African Peasantry as well as the biography of Govan Mbeki in the series Ohio Short Histories of Africa.