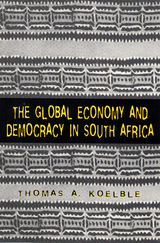 Democracy differs dramatically in First and Third World countries. Academic debate in the West focuses on democractic institutional arrangements and concepts such as elections, freedom of association, and freedom of speech, and little attention is paid to the content of emancipatory policy. In the Third World and especially in South Africa, emancipation and socio-economic redistribution are more important aspects in the popular perception of what democracy means than considerations of how political institutions function. These variations put regimes such as the ANC-led government on a collision course with the West.
Arguing that a consolidation of democratic institutions depends on a redistribution of resources, Thomas Koelble analyzes two crucial policy arenas-housing and education-to clarify the enormous problems facing the current South African government. For successful consolidation of institutional democracy in South Africa, Western political and financial institutions must provide support for that redistribution. Without their support, the ANC constituency's expectations that democracy will improve the quality of life will go unrealized, and the government may fail.
Koelble also posits that while the new South African constitution encompasses aspects of a consensus oriented system in terms of its federal structures and various rights to minorities, it is a system dominated by one large political party that is not constitutionally required to share power. He suggests that the ANC would have better served the cause of democracy had it included rather than excluded their opposition from political power. This majoritarian rule may deteriorate into another version of "race politics". Such race politics will have deleterious effects on both South Africa's polity and economy.
AUTHOR BIOGRAPHY
Thomas A. Koelble is an associate professor of political science at the University of Miami and author of The Left Unraveled: Social Democracy and the New Left in Britain and West Germany.