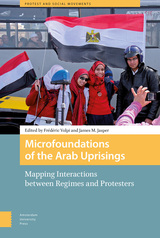 This book brings together a roster of prominent contributors to present a strategic interactionist perspective on the study of contentious politics in the Middle East in response to the Arab uprisings. The common thread among the contributions is an interest in the micro-level interactions between various strategic players, including not only the mobilisation of protestors during the uprisings but also the responses of regimes. The book also examines short to medium-term adaptations of the regimes and the collective action of opponents in the post-uprisings period, as well as the subsequent trajectories of the protesters themselves in the face of new forms of authoritarianism or democratisation.
AUTHOR BIOGRAPHY
Frédéric Volpi is Senior Lecturer in international politics at the School of International Relations of the University of St Andrews.James M. Jasper writes about culture, emotions, and politics, and teaches at the CUNY Graduate Center.
TABLE OF CONTENTS