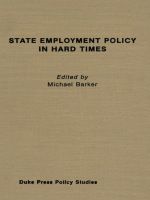 Two hundred years ago, Samuel Johnson observed that a society's level of civilization could be gauged by the manner in which it treated its poor. By that measure, the United States today is steadily losing ground. Whereas the number of officially defined poor dwindled steadily from the enactment of the Great Society programs in the mid-1960s, reaching a low of 24.5 million people in 1978, it has since risen to more than 32 million people. Although the economy continues to generate large numbers of new jobs, the basic unemployment rate continues to rise and current projections show little likelihood of unemployment rates consistently below 10 percent until some time after 1984, if then. In the years to come, the creation of an equitable and workable employment policy will be a major agenda item for politicians and policy makers at the state level, as well as for national leaders.
REQUEST ACCESSIBLE FILE