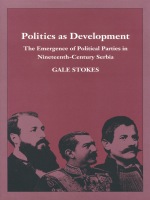 Nineteenth-century Serbia was an economically and socially backward country with an urban population of approximately 3 percent and a literacy rate in the countryside of less than 10 percent. Still, during that century it created a functioning democracy with a constitution, independent courts, political parties, and civil liberties. The Serbian experience challenges the view that political structures fundamentally depend on socioeconomic ones, since Serbia created a modern political system without developing economically. Politics as Development analyzes one aspect of that process, the emergence of political parties in the 1870s and the 1880s, especially the creation of the Serbian Radical Party under the leadership of Nikola Pasic. By mobilizing the peasantry through organizing the countryside, the Radicals proved themselves the most original nineteenth-century Balkan political movement. Based on thorough research of primary documents, Stokes’s study supports the view that the state and its attending class constitute an independent variable in the developmental process.
REVIEWS
“Based on scrupulously examined published and archival material, Professor Stoke’s book deals with the transition of Serbia from a patriarchal society to a modern state. it is an important contribution not only to East European historiography but also to comparative studies of political modernization. Politics as Development represents a skillful and impressive combination of historical analysis and theoretical insights.”—Wayne S. Vucinich, Stanford University