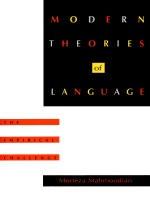 In a controversial look at the study of linguistics today, Mortéza Mahmoudian examines twentieth-century theories of language in light of empirical evidence. In the past, linguists have had to choose between a general linguistic theory aimed at universal explanatory power and specific, limited linguistic models. Arguing that at various levels of linguistic analysis different theories offer more or less explanatory power, Mahmoudian makes a persuasive case for an integrated approach incorporating the strengths of both methods.
The author begins with the identification of principles which, despite differences in terminology, are held in common by most twentieth-century linguists. He shows the implications, merits, and shortcomings of the major schools of linguistic thought, as well as the techniques one can use in gathering data. Ranging over a wide variety of international linguistic thinking, Mahmoudian takes up the question of what he calls experimentation, or the extent to which the application of certain linguistic theories have validity in constucting models.
Simultaneously a survey of the current state of linguistic theory and a case for the necessity of empirical verification in linguistics, Modern Theories of Language builds a bridge across the gulf between many long-standing conflicts in the theory of language. Accessibly written, this provocative work predicts future theorerical and epistemological developments and will prove essential reading for students and scholars of linguistics, as well as specialists in cognitive psychology and Romance languages.
AUTHOR BIOGRAPHY

Mortéza Mahmoudian is Professor of general linguistics at the Université de Lausanne. He is the author of Les modalités nominales en français and La Linguistique.

REVIEWS
"Modern Theories of Language offers a wealth of material, suggesting new perspectives and proposing new solutions to problems that are at the center of contemporary linguistic research. The work represents a breakthrough in the impasse that characterizes the relationship between theoretical and descriptive linguistics and shows the way to a constructive combination of different approaches."—Henry Schogt, University of Toronto