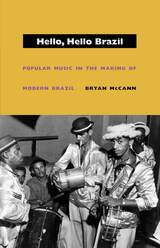 “Hello, hello Brazil” was the standard greeting Brazilian radio announcers of the 1930s used to welcome their audience into an expanding cultural marketplace.  New genres like samba and repackaged older ones like choro served as the currency in this marketplace, minted in the capital in Rio de Janeiro and circulated nationally by the burgeoning recording and broadcasting industries. Bryan McCann chronicles the flourishing of Brazilian popular music between the 1920s and the 1950s. Through analysis of the competing projects of composers, producers, bureaucrats, and fans, he shows that Brazilians alternately envisioned popular music as the foundation for a unified national culture and used it as a tool to probe racial and regional divisions.

McCann explores the links between the growth of the culture industry, rapid industrialization, and the rise and fall of Getúlio Vargas’s Estado Novo dictatorship. He argues that these processes opened a window of opportunity for the creation of enduring cultural patterns and demonstrates that the understandings of popular music cemented in the mid–twentieth century continue to structure Brazilian cultural life in the early twenty-first.

REVIEWS
“Hello, Hello Brazil is a fascinating discussion of Brazilian popular culture based on a set of documents virtually unmentioned in English-language scholarship. The topics covered—music, the music market, advertising, and fans and fan clubs—are crucial to understandings of Brazil.”—Jeffrey Lesser, author of Negotiating National Identity: Immigrants, Minorities, and the Struggle for Ethnicity in Brazil


“No Latin American country offers more for the study of popular culture through music than Brazil. Bryan McCann’s revelation of this neglected source will delight both Brazilian and non-Brazilian readers.”—Thomas Skidmore, author of Black into White: Race and Nationality in Brazilian Thought

3. The Rise of Northeastern Regionalism 96