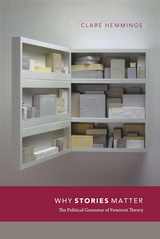 Why Stories Matter is a powerful critique of the stories that feminists tell about the past four decades of Western feminist theory. Clare Hemmings examines the narratives that make up feminist accounts of recent feminist history, highlights the ethical and political dilemmas raised by these narratives, and offers innovative strategies for transforming them. Drawing on her in-depth analysis of feminist journals, such as Signs, Feminist Review, and Feminist Theory, Hemmings argues that feminists portray the development of Western feminism through narratives of progress, loss, and return. Whether celebrating the move beyond unity or identity, lamenting the demise of a feminist political agenda, or proposing a return to a feminist vision from the past, by advancing these narratives feminists construct a mobile “political grammar” too easily adapted for postfeminist agendas. Hemmings insists that it is not enough for feminist theorists to lament what is most often perceived as the co-optation of feminism in global arenas. They must pay attention to the amenability of their own stories, narrative constructs, and grammatical forms to broader discursive uses of gender and feminism if history is not simply to repeat itself. Since citation practices and the mobilization of affect are central to how the narratives of progress, loss, and return persuade readers to suspend disbelief, they are also potential keys to telling the story of feminism’s past, present, and future differently.
AUTHOR BIOGRAPHY

Clare Hemmings is Reader in Feminist Theory and Director of the Gender Institute at the London School of Economics. She is the author of Bisexual Spaces: A Geography of Gender and Sexuality, co-author of Practising Interdisciplinarity in Gender Studies, and a member of the Feminist Review Collective.