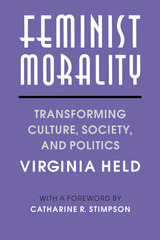 How is feminism changing the way women and men think, feel, and act? Virginia Held explores how feminist theory is changing contemporary views of moral choice. She proposes a comprehensive philosophy of feminist ethics, arguing persuasively for reconceptualizations of the self; of relations between the self and others; and of images of birth and death, nurturing and violence. Held shows how social, political, and cultural institutions have traditionally been founded upon masculine ideals of morality. She then identifies a distinct feminist morality that moves beyond culturally embedded notions about motherhood and female emotionality. Examining the effects of this alternative moral and ethical system on changing social values, Held discusses its far-reaching implications for altering standards of freedom, democracy, equality, and personal development. Ultimately, she concludes, the culture of feminism could provide a fresh perspective on—even solutions to—contemporary social problems.

Feminist Morality makes a vital contribution to the ongoing debate in feminist theory on the importance of motherhood. For philosophers and other readers outside feminist theory, it offers a feminist moral and social critique in clear and accessible terms.
TABLE OF CONTENTS