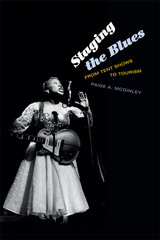 Singing was just one element of blues performance in the early twentieth century. Ma Rainey, Bessie Smith, and other classic blues singers also tapped, joked, and flaunted extravagant costumes on tent show and black vaudeville stages. The press even described these women as "actresses" long before they achieved worldwide fame for their musical recordings. In Staging the Blues, Paige A. McGinley shows that even though folklorists, record producers, and festival promoters set the theatricality of early blues aside in favor of notions of authenticity, it remained creatively vibrant throughout the twentieth century. Highlighting performances by Rainey, Smith, Lead Belly, Sister Rosetta Tharpe, Sonny Terry, and Brownie McGhee in small Mississippi towns, Harlem theaters, and the industrial British North, this pioneering study foregrounds virtuoso blues artists who used the conventions of the theater, including dance, comedy, and costume, to stage black mobility, to challenge narratives of racial authenticity, and to fight for racial and economic justice.
AUTHOR BIOGRAPHY
Paige A. McGinley is Assistant Professor of Performing Arts at Washington University in St. Louis.
REVIEWS
-- Genevieve ­Williams Library Journal