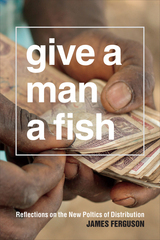 In Give a Man a Fish James Ferguson examines the rise of social welfare programs in southern Africa, in which states make cash payments to their low income citizens. More than thirty percent of South Africa's population receive such payments, even as pundits elsewhere proclaim the neoliberal death of the welfare state. These programs' successes at reducing poverty under conditions of mass unemployment, Ferguson argues, provide an opportunity for rethinking contemporary capitalism and for developing new forms of political mobilization. Interested in an emerging "politics of distribution," Ferguson shows how new demands for direct income payments (including so-called "basic income") require us to reexamine the relation between production and distribution, and to ask new questions about markets, livelihoods, labor, and the future of progressive politics.
AUTHOR BIOGRAPHY
James Ferguson is Susan S. and William H. Hindle Professor in the School of Humanities and Sciences and Professor in the Department of Anthropology at Stanford University. He is the author of Global Shadows: Africa in the Neoliberal World Order and the coeditor of Culture, Power, Place: Explorations in Critical Anthropology, both also published by Duke University Press.
REVIEWS
-- Vito Laterza Anthropology Book Forum


-- A. Peter Castro Journal of International and Global Studies

Introduction. Cash Transfers and the New Welfare States: From Neoliberalism to the Politics of Distribution 1

1. Give a Man a Fish: From Patriarchal Productionism to the Revalorization of Distribution 35

2. What Comes after the Social? Historicizing the Future of Social Protection in Africa 63

3. Distributed Livelihoods: Dependence and the Labor of Distribution in the Lives of the Southern African Poor (and Not-So-Poor) 89

4. The Social Life of Cash Payments: Money, Markets, and the Mutualities of Poverty 119

5. Declaration of Dependence: Labor, Pesonhood, and Welfare in Southern Africa 141

Conclusion. What Next for Distributive Politics? 191