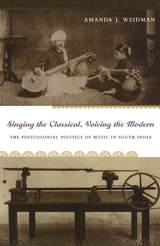 While Karnatic music, a form of Indian music based on the melodic principle of raga and time cycles called tala, is known today as South India’s classical music, its status as “classical” is an early-twentieth-century construct, one that emerged in the crucible of colonial modernity, nationalist ideology, and South Indian regional politics. As Amanda J. Weidman demonstrates, in order for Karnatic music to be considered classical music, it needed to be modeled on Western classical music, with its system of notation, composers, compositions, conservatories, and concerts. At the same time, it needed to remain distinctively Indian. Weidman argues that these contradictory imperatives led to the emergence of a particular “politics of voice,” in which the voice came to stand for authenticity and Indianness.

Combining ethnographic observation derived from her experience as a student and performer of South Indian music with close readings of archival materials, Weidman traces the emergence of this politics of voice through compelling analyses of the relationship between vocal sound and instrumental imitation, conventions of performance and staging, the status of women as performers, debates about language and music, and the relationship between oral tradition and technologies of printing and sound reproduction. Through her sustained exploration of the way “voice” is elaborated as a trope of modern subjectivity, national identity, and cultural authenticity, Weidman provides a model for thinking about the voice in anthropological and historical terms. In so doing, she shows that modernity is characterized as much by particular ideas about orality, aurality, and the voice as it is by regimes of visuality.

Note on Transliteration of Spelling xvii

1. Gone Native?: Travels of the Violin in South India 25

2. From the Palace to the Street: Staging “Classical” Music 59

4. Can the Subaltern Sing?: Music, Language, and the Politics of Voice 150

5. A Writing Lesson: Musicology and the Birth of the Composer 192

Afterword: Modernity and the Voice 286