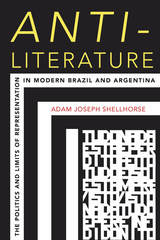 Anti-Literature articulates a rethinking of what is meant today by “literature.” Examining key Latin American forms of experimental writing from the 1920s to the present, Adam Joseph Shellhorse reveals literature’s power as a site for radical reflection and reaction to contemporary political and cultural conditions. His analysis engages the work of writers such as Clarice Lispector, Oswald de Andrade, the Brazilian concrete poets, Osman Lins, and David Viñas, to develop a theory of anti-literature that posits the feminine, multimedial, and subaltern as central to the undoing of what is meant by “literature.”

By placing Brazilian and Argentine anti-literature at the crux of a new way of thinking about the field, Shellhorse challenges prevailing discussions about the historical projection and critical force of Latin American literature. Examining a diverse array of texts and media that include the visual arts, concrete poetry, film scripts, pop culture, neo-baroque narrative, and others that defy genre, Shellhorse delineates the subversive potential of anti-literary modes of writing while also engaging current debates in Latin American studies on subalternity, feminine writing, posthegemony, concretism, affect, marranismo, and the politics of aesthetics.
AUTHOR BIOGRAPHY
Adam Joseph Shellhorse is assistant professor of Spanish and Portuguese at Temple University.
TABLE OF CONTENTS
Contents
Acknowledgments
Introduction: Anti-Literature
1. Figurations of Immanence: Writing the Subaltern and the Feminine in Clarice Lispector
2. The Letter’s Limit: Anti-Literature and Politics in David Viñas
3. Subversions of the Sensible: The Poetics of Antropofagia in Brazilian Concrete Poetry
4. The Untimely Matter of Anti-Literature: The Politics of Representation in Haroldo de Campos’s Galáxias (1963–1976)
5. The Antinomies of Anti-Literature: The Politics of the Baroque in Haroldo de Campos and Osman Lins
6. Writing Subaltern Redemption and Insurgency: Haroldo de Campos’s “The Left-Winged Angel of History”
Conclusion: The Untimely Secret of Anti-Literature
Notes
Works Cited
Index
REQUEST ACCESSIBLE FILE