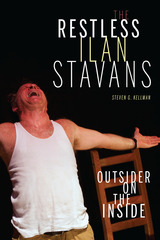 This is the first book-length study of one of the most prominent and prolific Latino academics, Ilan Stavans. He has written extensively on Latino culture, Jewish culture, dictionaries, immigration, language, Spanglish, soccer, translation, travel, selfies, and God. The Restless Ilan Stavans surveys his interests, achievements, and flaws while he is still in the midst of an extraordinarily productive career. A native of Mexico who became a U.S. citizen, he is an outsider to both the Chicano community that often resents him as an interloper and the American Jewish community that he, who grew up speaking Yiddish in Mexico City, often chides. The book examines his unlikely rise to prominence within the context of the spread of multiculturalism as a seminal principle within American culture. A self-proclaimed cosmopolitan who rejects borders, Stavans is both insider and outsider to the myriad of subjects he approaches.
AUTHOR BIOGRAPHY
Steven G. Kellman is a professor of comparative literature at the University of Texas at San Antonio.
TABLE OF CONTENTS
Contents
Preface
Acknowledgments
1. The Prodigy
2. The Stavans Paradox
3. Stavans the Hispanic
4. Stavans the Jew
5. The Multicultural Moment
6. The Immigrant Melt
7. Lion Prowling the Academy
8. Ilan Stavans Tongue Snatcher
9. Chameleon Man
Works Cited
Index
REQUEST ACCESSIBLE FILE