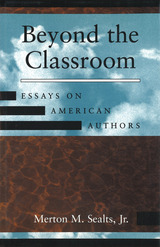 Merton M. Sealts, Jr., a long-respected scholar and teacher of Emerson and Melville, has written, "I shall never tire of such writers, nor absorb all that they have to teach." This new collection of Sealts's essays reflects his many years of classroom experience and ongoing scholarship since his retirement in 1982. Most of these essays were originally delivered as public lectures before diverse audiences beyond the classroom; others first appeared in study pamphlets and as chapters of books.

These lucid essays, though varied in subject, have the commonality of an emphasis on teaching. The first essay, entitled "Emerson as Teacher," demonstrates how Emerson "provoked and inspired and educated his students--and his students' students."

In the most recently written essays Sealts deals with four of Emerson's contemporaries--Whitman, Thoreau, Hawthorne, and Melville--who responded variously to Emerson's teachings. A common thread among these four essays is each author's distinctive use of first-person narration.

Teachers of literature at every level will greatly benefit from these highly readable discussions, which illustrate practical strategies for reading and teaching literary works. Included in the appendixes are questions for the study of Melville's Bartleby, Benito Cereno, and Billy Budd, Sailor, which are also treated in individual essays.

Merton M. Sealts, Jr., is Henry A. Pochmann Professor of English, Emeritus, at the University of Wisconsin-Madison.  He is the recipient of numerous awards, including the Distinguished Achievement Award from the Ralph Waldo Emerson Society for 1995.  He is author or editor of many books on Melville and Emerson, most recently Pursuing Melville, 1940-1980 and Emerson on the Scholar.