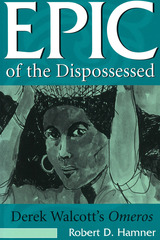 In Epic of the Dispossessed, Robert D. Hamner offers an insightful, well-researched analysis of Omeros, the masterful epic poem by 1992 Nobel Laureate Derek Walcott. Rich and various, Omeros is an innovative extension of the epic tradition. Despite Walcott's insistence that he violates the formulaþhe notes his autobiographical presence in the poem and the absence of classical heroic figures and epic battlesþthe poem incorporates fragments of all the definitive characteristics of the genre. Hamner establishes that through its self-reflexive textuality, Omeros complements the time-honored tradition of the epic by giving voice to the marginalized peoples of the New World.

Hamner briefly explains his perception of the epic tradition and its viability in contemporary literature. He examines Walcott's writing career and traces his development of devices, themes, techniques, and a narrative style essential to epic poetry. Although Walcott could not have fully anticipated Omeros, a retrospective view of his writing reveals the consistent accumulation of the skills and broad scope required for such an undertaking. Hamner attempts also to show that Walcott has incorporated into his personal style not only the more obvious aspects of his formal education but also uniquely West Indian cultural material and forms of expression.

Hamner describes Omeros as an epic of the dispossessed because each of its protagonists is a castaway in one sense or another. Regardless of whether their ancestry is traced to the classical Mediterranean, Europe, Africa, or confined to the Americas, they are transplanted individuals whose separate quests all center on the fundamental human need to strike roots in a place where one belongs.

Walcott's vivid, lyrical verse is visually compelling and aurally appealing. He is, however, a richly complex, allusive writer dealing with a wide range of profound human problems. Given the exciting climate of postcolonial and postmodern criticism, Walcott offers students and scholars unparalleled opportunities for challenging, creatively interpretive insights. Epic of the Dispossessed will be a valuable companion to the work that may prove to be Walcott's crowning achievement. The fresh and original Omeros stands on its own merits; nevertheless, it deserves to be examined in light of both Western tradition and its Caribbean context.

Robert D. Hamner is Senior Professor of English and Humanities at Hardin-Simmons University in Texas. He is the author or editor of six books, including Derek Walcott.