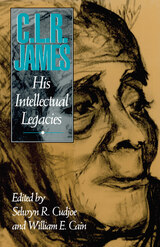 C.L.R. James: His Intellectual Legacies
edited by Selwyn R. Cudjoe and William E. Cain
University of Massachusetts Press, 1995
Paper: 978-0-87023-907-6
C.L.R. James (1901-1989) made important contributions in a host of fields--literature, criticism, cultural studies, political theory, history, and philosophy. One of the most astute minds of this century, he served as mentor for two generations of international intellectuals. He contributed enormously to their understanding of the colonial question, the Negro question, the Russian question, the role of dialectics in proletarian struggle, and the theory and practice of Marxism in the Americas. In addition to The Black Jacobins, his incisive account of the Haitian revolution of the 1790s, and Notes on Dialectics, James published a range of other books, including a classic work on the game of cricket and a study of Herman Melville.

This collection of essays offers a variety of fresh perspectives on James's life and writings. Included are reminiscences of those who knew James well and critical essays by eminent scholars. The book is the first to offer a full treatment of James's many contributions to twentieth-century intellectual life.
AUTHOR BIOGRAPHY
Selwyn R. Cudjoe is professor of Africana studies at Wellesley College. He is author of V. S. Naipaul: A Materialist Reading and editor of Caribbean Women Writers and Eric E. Williams Speaks. Professor of English at Wellesley College, William E. Cain is author of The Crisis in Criticism and F. O. Matthiessen and the Politics of Criticism.
REVIEWS
"James, a brilliant and original thinker, deserves both the deep admiration and searching criticism this book offers. The range and quality of this collection ensure that it will have an impact. I recommend it enthusiastically and unreservedly."—David Roediger, author of Wages of Whiteness