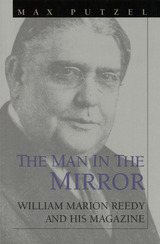 A flamboyant and controversial figure, William Marion Reedy was one of the most successful literary entrepreneurs of his day. Editor of the Mirror, a St. Louis weekly, from 1891 to 1920, Reedy played a large role in breaking down the genteel literary tradition, developing a native poetry, and helping to form some fifty significant poets. Emily Dickinson, Stephen Crane, Ezra Pound, Edwin Arlington Robinson, Amy Lowell, Sara Teasdale, Carl Sandburg, and Vachel Lindsay are just a few of the writers whose works Reedy featured in his magazine.

The Man in the Mirror offers a colorful description of Reedy's boyhood in St. Louis during the turbulent period following the Civil War. This well-documented biography follows Reedy throughout his years as a reporter in the early days of the St. Louis Post-Dispatch and Globe-Democrat and as editor of the St. Louis Star. Only seven years after Reedy founded the Mirror as a national journal of opinion--a potpourri of political comment, social gossip, and literary miscellany—the magazine's circulation far surpassed that of the Dial, Atlantic Monthly, or Nation.

Max Putzel truly conveys the spirit and personality of Reedy by carefully examining his life within the context of the literary world he influenced so significantly. Full chapters are devoted to his relationships with Theodore Dreiser, Ezra Pound, Vachel Lindsay, Amy Lowell, and others. Edgar Lee Masters, whose Spoon River Anthology first appeared in the Mirror, called Reedy both the "Literary Boss of the Middle West" and his best friend. In fact, Reedy had quite a range of friends, from librarians to politicians, St. Louis locals to Teddy Roosevelt. His personal effect on people, writers and readers alike, is what has made him such an important historical figure.

It is a tribute to Reedy's critical judgment that the reputations he helped to build would later overshadow his own. The Man in the Mirror, lauded as "the first substantial study of Reedy's work" by American Literature, reveals Reedy's notable contribution to the literary world.

Max Putzel worked as a journalist and foreign correspondent. He was Professor of English at the University of Connecticut in Storrs, where he also served as Assistant Dean of the Graduate School.