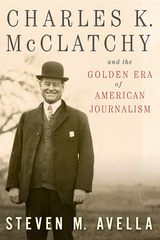 Charles K. McClatchy was twenty-five when he inherited The Sacramento Bee from his father, and his ensuing career as the paper’s editor extended well beyond the newsroom. Until his death in 1936, McClatchy was a consistent advocate for Progressive politics, a crusader for urban reform, a staunch isolationist, and a voice for Northern California. This biography explores his career as the long-time editor of the Bee in a work that weaves the history of Northern California with that of American newspapers.

Steven M. Avella is a professor of American history at Marquette University. A Sacramento native, he is the author of several works on the city, including The Good Life: Sacramento’s Consumer Culture and Sacramento and the Catholic Church: Shaping a Capital City.

REVIEWS
“Any historian searching for insight into the influences of early American newspapers on policy, the issues affecting the history and development of the American West, or simply the personality of such an imposing historical figure will find it in these pages.”—American Journalism


“A critically important contribution to academic library American Journalism History collections, and will prove of immense interest to both academia, journalism students, and non-specialist general readers with an interest in the history of late 18th and early 19th century American journalism.”—Midwest Book Review

“An original work that combines scholarly acumen with shrewd analysis. It will become the ‘go to’ book for anyone interested in the role of the press in California history from the late 19th century to the mid-20th century.”—Bill Issel, San Francisco State University, author of Church and State in the City: Catholics and Politics in Twentieth-Century San Francisco